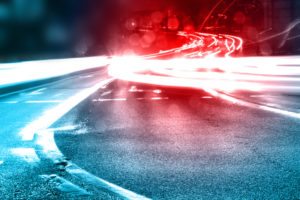 The collision happened on the northbound side of Hwy 99 about 2:07 a.m. on Jan. 11th, according to the California Highway Patrol.

Initially, three motorists collided near the center divider including a white Toyota Prius, a black Nissan Altima and a white Dodge Caravan. Authorities report the Dodge was traveling at high speed prior to the collision and its driver reportedly fled the scene on foot. The driver who fled was described as a bald man in his 40s carrying a tire iron and wearing a black leather jacket and blue jeans.

Next, CHP officials reported there was a separate crash following the first one. First, a driver in a semi-truck struck the blacked-out Dodge in the middle lane. Then, the man walking in traffic lanes who fled the initial crash who was seen running in a northbound direction on the southbound side of Highway 99 near the center divider. Another truck, a gray Toyota Tundra, reportedly struck the pedestrian and pulled to the right shoulder.  The pedestrian was not responsive after the crash.

Paramedics responded to the scene, but sadly the pedestrian suffered major injuries and died at the scene. Another person complained of pain to their head, but it’s unknown if they were transported to a hospital.

Investigators seek to determine fault for the pedestrian accident on Highway 99.