Juvenile, Several Others Injured in Multi-Vehicle Crash at Cedar and Alluvial 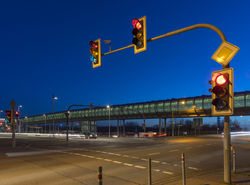 January 10, 2019 – Several people, including a 12-year-old child, were injured in a traffic collision at the intersection of Cedar and Alluvial avenues, according to Fresno Bee.

The accident was reported on Thursday at 6:20 p.m.

As per the article, a FAX bus was headed south on Cedar when the driver allegedly got distracted talking to a passenger and ran a red light. The bus then struck an SUV, that was going east on Alluvial. The impact sent both automobiles into the median and the northbound lanes of Cedar, where they hit three vehicles–two SUVs and a car, that were waiting at the red light.

Officials determined there were two adult passengers and two children both, approximately age 12, in the bus at the time of the collision. Medical records indicated paramedics transported one juvenile, an adult passenger, and the driver of a silver Honda to hospitals for treatment of unspecified injuries.

No details have been yet disclosed on the name and condition of the bus operator following the wreck.

California Highway Patrol will carry out a forensic examination of all vehicles involved, as well as photos that were taken of the scene, will help investigators draw up a firm conclusion for what happened. While it appears that the driver of the bus will be held fully responsible for causing the accident, authorities will thoroughly look into how fast each driver was going, whether or not alcohol or drugs were involved, whether or not there were any mechanical issues with either vehicle, whether or not one of the drivers ran a red light or simply did not yield to the right of way motorist. The investigation will also consist of looking at measurements of evidence left by the vehicles such as point of impact, final resting positions of each vehicle, skid marks, and gouge marks.

In such cases where negligence or wrongdoing may have been a factor, the victim will be granted the right to file a personal injury lawsuit against the driver who caused the collision. Personal injury victims have the right to seek compensation for damages including medical expenses and hospital bills, and pain and suffering.