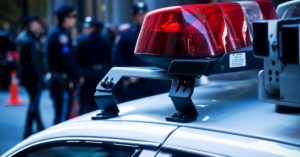 One of the police officers was hospitalized in critical condition and the other had serious injuries in the multi-vehicle crash in South Los Angeles.

The two police officers were responding to a backup call about 9:50 p.m. on Wednesday when the incident took place.

The tow truck driver allegedly ran through a red light at the intersection with Main Street and collided with the LAPD SUV. The patrol vehicle struck the back passenger side of the tow truck and another SUV and a car were also involved, according to the Los Angeles Police Department.

The driver’s side door of the police vehicle was pried open by arriving Los Angeles Fire Department paramedics who used the Jaws of Life to free one of the police officers.

Also injured in the crash was the tow truck driver who was transported to a hospital in critical condition, police said.

There were also five other people who suffered minor injuries and were treated by the LAFD paramedics.