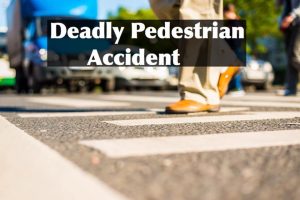 North Hills, Los Angeles County (July 30, 2016) – A 55-year-old male pedestrian suffered fatal trauma as a result of a being hit by a car at Sepulveda Boulevard and Parthenia Street, according to an article by ABC 7.

In detail, the article mentioned a pedestrian was crossing the intersection when he was suddenly struck by an oncoming Toyota Prius which evaded the scene after collision. The force from the impact resulted in the pedestrian knocked down on the ground. Responding paramedics located the victim laying on the road, lifeless.

Later in the day, police noticed a vehicle that matched the description of the hit-and-run suspect’s car. Police chased the vehicle and eventually arrested the felon identified as 54-year-old Mark Christian Johnson. As per the article by KTLA, Johnson was booked on a felony evading charge; however, other charges related to the initial incident will be added.

There was no word on the identity of the victim or the suspect.

If you have lost a family or friend from a road accident, contact our law firm today at 800-235-6801. Our Los Angeles wrongful death lawyers will speak to you and they will bring all expertise to your case. Together with our lawyers, we will get the justice you deserve.