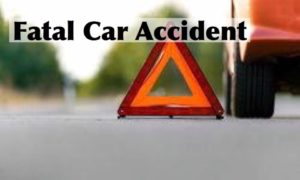 Officials said 28-year-old David Ruiz was behind the wheel of a 2016 Dodge Dart heading south on the freeway near Hammer Lane offramp. For reasons still under investigation, the man lost control of the vehicle and spun out across all lanes of traffic.

First responders found the Dodge down the embankment on the west side of the freeway and smashed into a tree on the passenger side.

Paramedics immediately rendered aid to both Ruiz and his sole female passenger. Per local news source, the 24-year-old woman sadly died at the scene as a result of the crash. The identity of the fatal victim remained undisclosed pending notification of next of kin.

The detectives handling the case continue to determine if the rainy conditions played a role in the deadly accident. Liabilities in the car crash have not been revealed thus far.