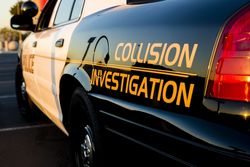 February 5, 2019- According to the ChicoER, a deadly pedestrian versus vehicle collision left a man fatally injured over the weekend on northbound Highway 99.

California Highway Patrol officials responded to the collision which occurred in the late stages of Saturday night at 11:45 p.m.

Preliminary investigative efforts indicate that Joshua Washburn, 46, of Gridley, experienced mechanical issues with his vehicle forcing him to pull over and phone a friend.

As Washburn’s friend arrived, they began crossing the road before Washburn was struck by a 08′ Toyota driven by a 20-year-old man of Yuba City.

The impact left Washburn with fatal injuries as he was pronounced dead at the scene.

Meanwhile, 20-year-old driver involved was uninjured and not believed to have been under the influence.

No additional details have been made available at this time.

The family of Joshua Washburn will be entitled to a wrongful death lawsuit following this incident. Victims are entitled to seek compensation for damages including funeral costs, medical expenses, loss of companionship, and pain and suffering.

Contact our wrongful death law firm today if you are looking for assistance at 855-703-4186.